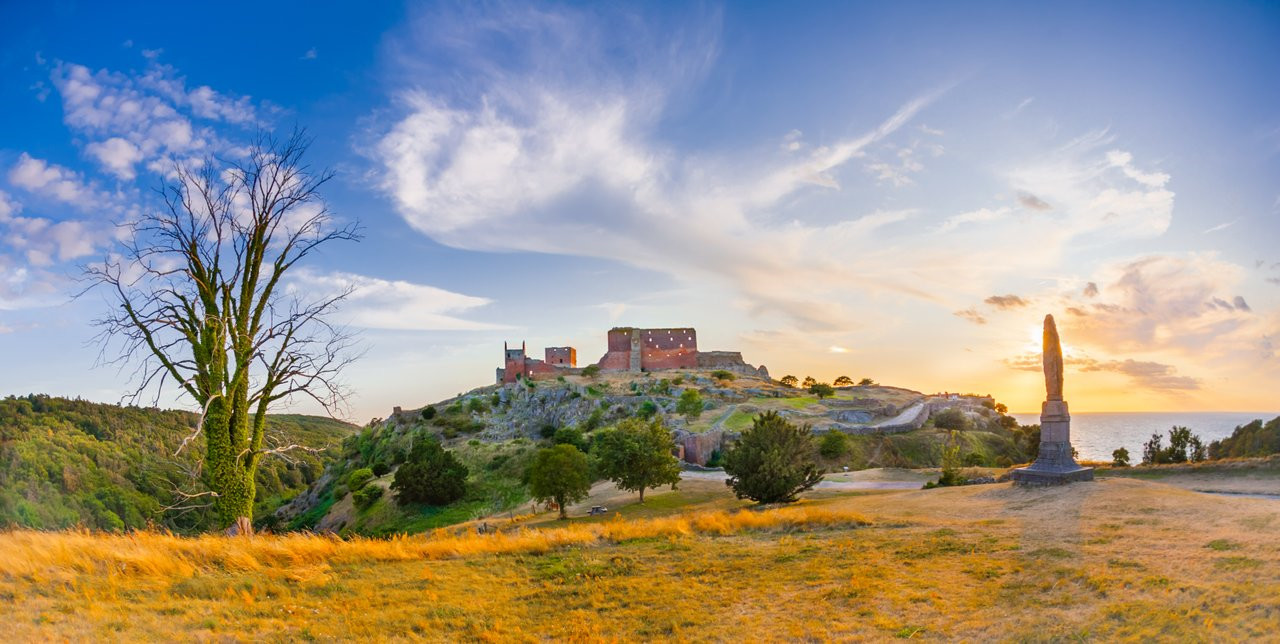 Bornholm is a slow-paced Baltic island, west of the Etholmene Islands. Lying off the coasts of Sweden and Poland, Bornholm receives many hours of sunshine and the extraordinary, pure light has always attracted artists to the island.
Bornholm presents the Danish landscape in a nutshell; it is hilly and fertile with fields and large forests. It's the only place in Denmark where you can walk out on craggy, granite coastline. Bornholm also offers you pure, white beaches, particularly Dueodde, a vast stretch of fine sand.

Bornholm is shaped like a lopsided square and, at 588 km2, is slightly larger than Falster. The small Ertholmene archipelago, which contains the old defence islands of Christiansø and Frederiksø, is located about 18km from Gudhjem to the northeast of Bornholm. It is Bornholm’s delightful and unique nature that first and foremost attracts over half a million visitors annually.

The rocky island is not only a natural wonder, but also culturally unique. The four round churches and the enigmatic petroglyphs are worth a trip. The Bronze Age drawings at Madsebakke near Allinge and the impressive Østerlars Rundkirke are strange and interesting places to visit. Another intriguing ancient site is Rispebjerg in Southern Bornholm, which houses traces of a sun temple from the Stone Age and an establishment from the Iron Age.

In the context of Denmark, Bornholm’s countryside development and buildings are unusual. Farms are scattered, and there are no manor houses or actual villages on the island. However, strings of coastal towns decorate the coastline, Svaneke and Gudhjem being pearls among them. On the flat shores of Southern Bornholm lie the fishing ports of Snogebæk and Arnager, which are known as island ports.

In the Middle-Ages, Aakirkeby was the capital of Bornholm. Today, in addition to an unusual church with twin towers, it is home to the visitor centre of NaturBornholm – with real dinosaur remains! The island’s centre is covered by Almindingen Forest and Paradisbakkerne, where you’ll find several ‘rocking stones’, the Echo Valley, the royal castle of Lilleborg, the sanctuary fortress of Gamleborg, and bison grazing on the grass in Svinemosen.

Bornholm has been called ‘the nightingale island’. Toward the end of spring you can hear hundreds of nightingales singing from the shrubberies and verdant woods. In Danish, the nightingale is called “nattergal”, however, on Bornholm it’s called a ”fjælstaunijn”. During the spring you will experience not only nightingales but also a range of other songbirds and an unparalleled abundance of flowers. Treat yourself to the experiences of Denmark’s largest waterfalls at Døndalen.

The smokehouses with their characteristic chimneys are found everywhere and typically serve as both restaurants and shops. Delicious smoked herring is Bornholm’s specialty – not to mention the local dish, “Sol over Gudhjem”, which is smoked herring topped with raw egg yolk, radishes, and chives on rye bread. Save room for Bornholm’s salmon, cod, halibut, mackerel, eel, trout, shrimp – and other smoked delicacies!

For more information about Bornholm

Find your campsite at Bornholm